Last month I was super-excited when I learned we would be going to the Pirate's Dinner Adventure here in Buena Park, California!
Well, we went! We drank, we sang and we were merry!! 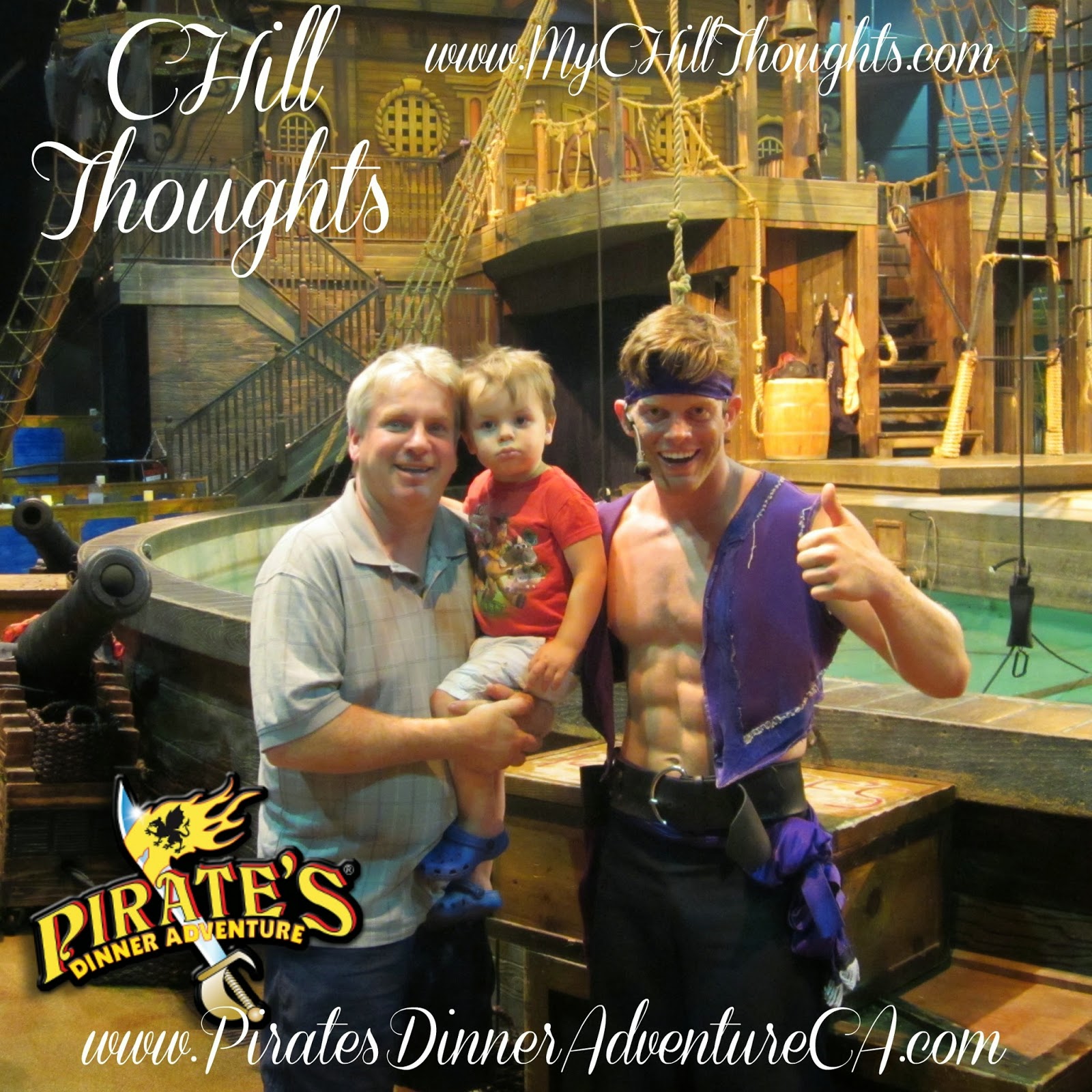 We arrived about a 1/2 hour before showtime, though I was told we could have arrived up to an hour earlier.  The first thing we did when we arrived was pose for a family souvenir photo outside before we were ushered inside and offered the opportunity to purchase flags, swords and bandannas.  We then entered the lobby/waiting/pre-show area, which had a dozen or more tables as well as benched along the walls that were all already full of families out for an evening of swashbuckling fun. 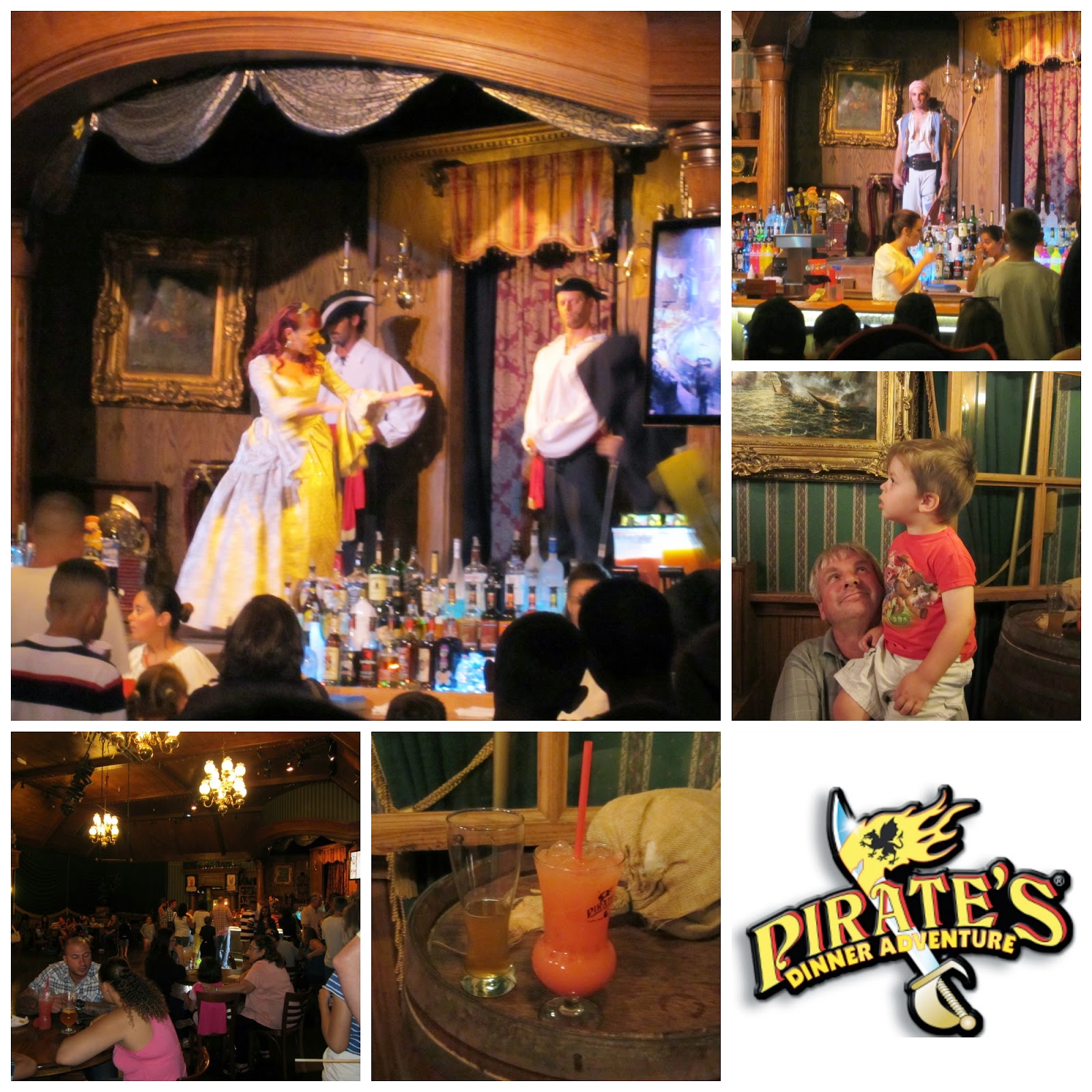 There is a gift shop available for browsing as well as two bars where you can purchase souvenir glasses filled with the most expensive pirate-themed cocktails or beers you'll ever drink (DH had a beer and I had a Mai Tai and those two drink together were a dollar or so shy of $30!)!  BUT, since we were out for an evening of fun and the tickets were free so that I could review the show and write this post, I decided it was worth the splurge.  Also, you can get drink refills for about 1/2 price, which is still expensive but at least it's not a whallop every time!
While we waited, appetizers (nothing impressive - little cocktail weiners which we didn't get to try because the grandma with all her grandkids grabbed them all before we could snatch one and soggy french fries) were passed around the crowds by waiters and waitresses in pirate-garb.
Then, the pre-show began on a small stage right behind the main bar.  The theme of the evening's show was revealed (a princess captured by a gang of pirates, each with their own "theme color") and we were directed to follow the pirate whose color was the same as our tickets into the theater once they were announced.  It was entertaining and effectively moved everyone from the crowded lobby into the theater in an organized and fun way. 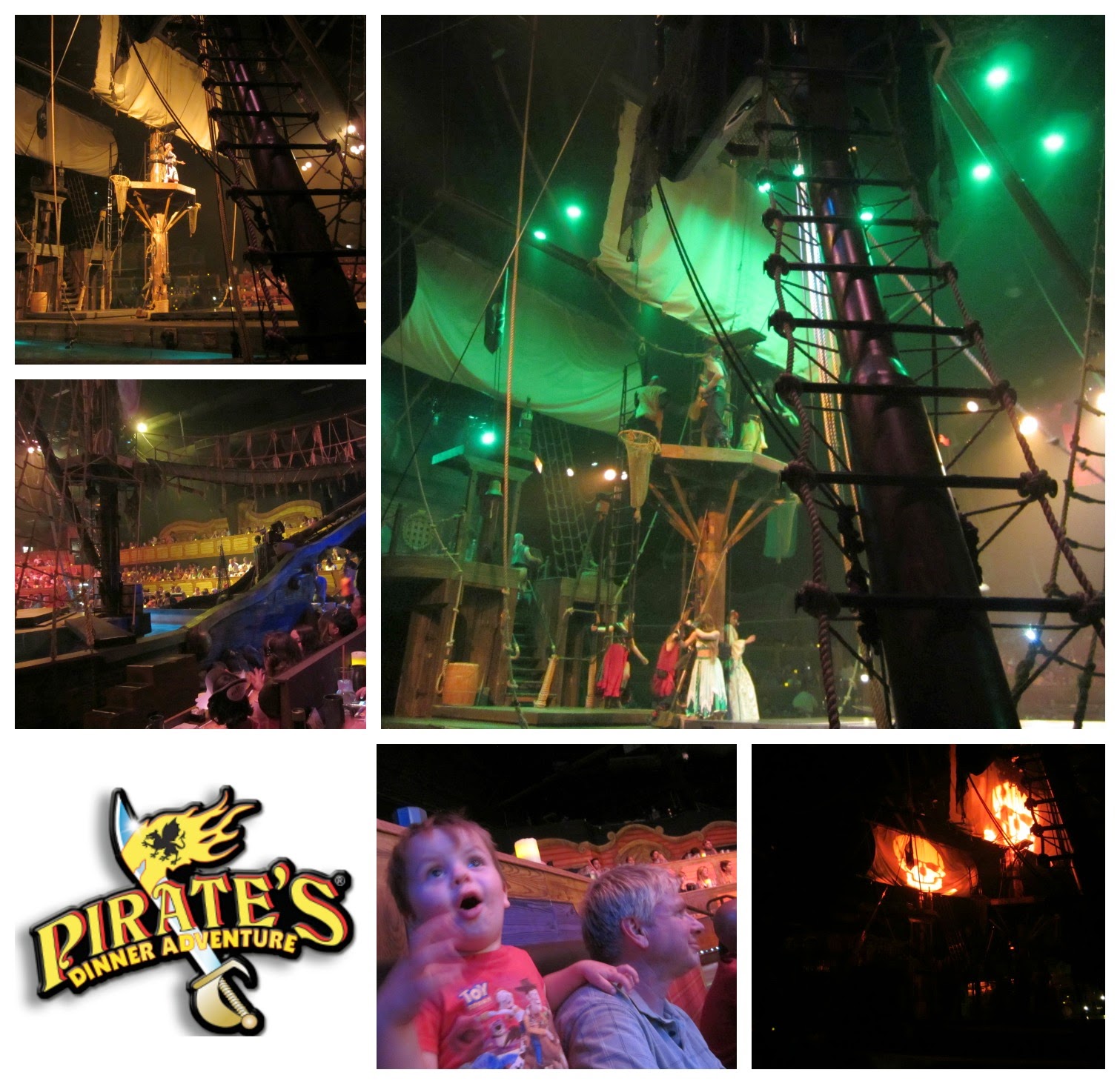 The theater consists of a large stage area surrounded by water and resembling a pirate ship which the audience sits around in their assigned color sections.  The show itself includes singing, dancing, some acrobatics and lots of audience participation.  There are storms and dragons and cannons and magical gypsy spells - the story line can get a bit jumbled and confusing, but in all it's fun and entertaining.

While the show progresses, you are served a three-course meal!  First, you choose between tomato soup or tossed salad; DH and I both chose salad which was a good size and tasty, nothing spectacular, but good.  For your main course you can choose 1/2 a roast chicken or Beef Kabobs.  DH and I ordered one of each and opted for the kids' meal with chicken nuggets for Buddy.  Both the chicken and the kabobs were OK, not great but not bad, but the chicken nuggets looked like they had come out a frozen TV dinner tray and were all soggy on the bottom.  If you're going to pay for a kid's meal, I suggest getting the roast chicken because at least it's real meat!  The side dishes were OK, the mashed potatoes were actually pretty good but the vegetables tasted like they were straight of the freezer section.  The dessert course is a brownie a-la-mode with chocolate sauce; this was Buddy's favorite part of the night!
After the show, the cast sticks around for photos and to greet the kids in the audience, which was really nice.
Overall, I'd say the show was good.  We actually had a really fun time and Buddy was totally mesmerized by the whole thing.  If I had paid full price for the tickets as well as everything else, I would have been a bit irritated when I received the request for a gratuity from our server at the end of the meal (they suggest $5 per adult and $3 per child, which is much less than the minimum 15% percent tip that's usually recommended, but still I wasn't expecting that they didn't pay their servers well and felt obligated to tip a tad more than they recommended); as it was I spent over $60 and that was just for drinks and tips!  This is definitely geared more for tourists and those on vacation and is probably a bargain compared to what food and drinks in the local theme parks cost.
So, if you're looking for a fun night out with the family, check out the Pirate Dinner Adventure in Buena Park, California and be sure to plan to arrive early and spend buckage on all the extras and have a Swashbuckling GOOD time!!
Leave a Comment
submit a review Join our blog team
More Reviews of Pirate's Dinner Adventure